Before I unveil this month’s stellar blanket selection, immerse yourself in a fever dream and join me at a rock concert I attended last week. The headliner: King’s X. A three-piece powerhouse that has been playing and recording since the 1980s. Musician’s musicians. They’ve never made it big and realize they’re not about to now, but still they play on for themselves and their devoted fans. Their music is as serious as a heart attack and to prove it their drummer has had two.

There were a pair of opening acts. The first was The Accountants, a group of four middle-aged men in matching drab brown suits. Led by their founder, Alan Porchnick, the quartet rhythmically tapped out complex calculations on hardbound ledgers using only Eberhard #2 pencils. Not content to rely on their classic hits, The Accountants deftly mixed a selection of both old and new numbers.

Next up was a Scottish band…A Dearth Of Ladles. Their set was cut tragically short as they had forgotten all their instruments in Glasgow and their singer had laryngitis.

The lack of any musical output at all from the boys didn’t go down well with the crowd, but nobody was quite sure how to curse a Scottish band. We put our heads together and named everything Scottish we could think of: bagpipes, single malt whiskey, the movie Braveheart, golf and former late night talk show host Craig Ferguson.

The wee lads knew they deserved a harsh reprimand, but we were unable to craft a suitable insult and nobody could deliver it in a convincing Scottish accent, anyway. Eventually the band just drifted off in the general direction of Loch Ness.

It had been a long time since I’d been to a rock show, so I practiced looking groovy and far out for a while. The unmistakable aroma of marijuana wafted through the air. I don’t partake myself, but to show my solidarity and yet be age-appropriate I dropped some antacid.

Against this backdrop of anarchy King’s X took the stage. Let me introduce the guys to you. Doug “dUg” Pinnick – like many lead singers in rock a left-handed bassist who’s 67, black and gay. On lead guitar clocking in at age 57 and still sporting an impressive mass of hair is Ty Tabor. Banging the drums solely and also 57 is the aforementioned heart attack victim Jerry Gaskill.

How do I explain King’s X music to you? I can’t and I won’t. Watch this video!

A hour and a later after delivering all their best songs while settling into a groove deeper than the Marianas Trench, it was over. No leaving the stage a few times and coming back to play in response to the crowd’s thunderous applause and imploring chants. King’s X is too old for that nonsense.  They played hard and long and when they felt they’d completed their job and earned their money Doug Pinnick stepped to the mike and announced, “We’re done.”

But we’re not, because I’ve got a blanket for you. Those of you who’ve read my enthralling books will recall the first documented Indian trade blanket manufactured was in 1892. This blanket is by an unknown company and certainly made not long after that and definitely before 1900. I’d say 1895 is about right on the money.  A simple, but classic pattern and gorgeous coloration. It has a Capps aesthetic with Racine-ish colors. Like you don’t? 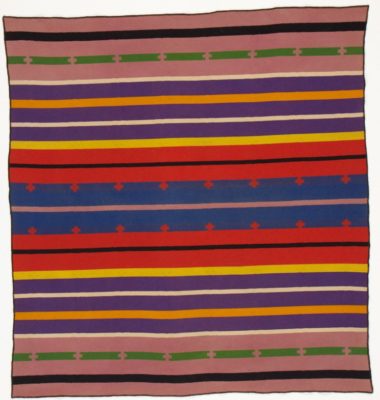