Did you catch this tidbit on May 30: “A new intelligence analysis reportedly states that the North Korean regime is not willing to give up their nukes, but instead may open a US burger joint in their capital, Pyongyang.”

North Korea knows that our Predator of the United States loves burgers, so welcome to their tribute hamburger chain McDonald Trump’s.

I’ll have a Sleazeburger and a Diet Cohen. Would I like any lies with that? Of course. Hmmm, my burger’s a little cold. You’ll nuke it? Thanks!

Kim Jong Un is so serious about this proposal he’s even offered to change his name to Sesame Seed Un.

To reciprocate, America will be opening a North Korean restaurant franchise. No food will be available at any location. If that venture goes well, there are additional plans for an all you can’t eat chain.

That’s pretty much all the puns and word play I’ve got on that subject, so let’s roll right into Blanket of The Month.

One of my favorite patterns is the Racine Woolen Mills design I call the Pipe and Feather. It also features Navajo weaving combs as a component of the design, but calling it the Pipe and Feather and Navajo Weaving Comb pattern took up way too much of my time.

A word about the fringe. You’re so perceptive you’ll notice it’s a different color on each side. Only Racine did this. Fringe on an Indian blanket means it was made for a woman’s use and is a shawl. A non-fringed blanket is a man’s blanket and is referred to as a robe.

What’s even better than finding very early blankets is finding historical pictures of them being used by Native Americans. In this case it comes in the form of a postcard that postcard collectors refer to as a “real photo”. I believe the lovely ladies pictured are from the Kiowa tribe.

This just in: North Korea has announced they will immediately destroy America with nuclear warheads launched by sea, but will be proudly serving sandwiches on all their subs. 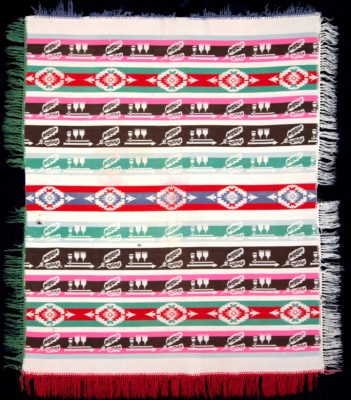 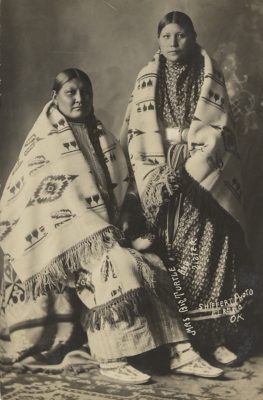