Before my appointment with death by tarpon in Costa Rica (see July’s entry) I must file a report on an event that occurred at the Great Southwest Antique Show in Albuquerque a few short weeks ago.

A middle-aged gentlemen approached my booth and exclaimed,”I love these blankets. I would love to own one and I see you have a fantastic selection!”

Ka- ching! “Are there any particular colors you prefer?,” I answered cheerily.

“It’s not a matter of color. Let me tell you a little about myself. I grew up watching Roy Rogers on TV and he was my hero. To this day I think he’s one of the greatest Americans who’s ever lived. So what I want is a blanket that will evoke that same feeling I had watching Roy Rogers as a young boy.”

“I think I can help you,” I replied, and simultaneously lifted five blankets off the stack in front of me.

The blanket that now topped of the stack had Roy Rogers’ name all over it along with Mr. Rogers vividly pictured in various heroic Western poses.

“I wonder if this blanket reminds you at all of Roy Rogers,” I mused.

He looked it over very carefully. “No. Not really,” he decided.

“I believe our conversation has just come to an end,” I said, and he wandered off to the next stop in his personal journey through the Twilight Zone.

I went on to do two shows in Santa Fe and told this story to one and all including Joshua Baer, the well-known art dealer, wine columnist and deep thinker. He asked if I still had the blanket and I answered that I did.

“I’m buying it,” he announced.

I thought Josh was joshing. “You can’t possibly want it,” I informed him. “You deal in the best. This is kitsch. I never would have bought it myself, but it was part of an otherwise excellent collection and it was an all or nothing deal.”

“You don’t understand. I could care less about the blanket. What I’m buying is the story.”

What I’m unclear on is whether by writing me a check he bought not only the blanket he doesn’t care about, but the worldwide rights to the story. It is therefore possible I have violated our deal by repeating the tale here. This could get ugly. I just hope my phone doesn’t ring and Michael Avenatti is on the other end.

But, as Ali G would say, I digest. In a huge departure from tradition, an actual blanket is not August’s Blanket Of The Month. Let me introduce you now to my dear friend Robert Sommers.

I have breakfast every single morning during the almost two weeks of the Santa Fe shows with Robert and we laugh like loons. (Robert would add that loons are a group of aquatic birds that are members of the genus Gavia, family Gaviidae and order Gaviiformes.)

What I find particularly appealing about Robert is he hates virtually all people, but has an uncontrollable thirst to initiate a usually horrible conversation to any person that is within range of his melodic, yet grating tenor voice.

Case in point our breakfast at Cafe Pasqual’s, one of Santa Fe’s most celebrated eateries. Our scene begins with Robert in the act of maneuvering an adjacent chair to accommodate a woman attempting to squeeze into her table.

Keep in mind this is a famous restaurant and this woman – undoubtedly a tourist – has probably been dreaming about her magical Santa Fe breakfast at Pasqual’s for months.

“Hope I didn’t pinch your bum!,” Robert said as he removed the chair from her ass. She loathed him instantly.

She buried herself in her newspaper – the New York Daily News.

“The News? Wow! Really? That paper is for idiots. Why aren’t you reading the Times?,” Robert chirped.

“I really don’t want to have a discussion with you,” she snarled. Robert beamed – another happy conversational customer.

We usually eat breakfast at a joint called The Pantry and as everyone does during breakfast, Robert brought up the subject of incontinence. He postulated that adult diapers are really not all that stylish and especially non-appealing to those of us in the Indian and Western art field.

Thus a billion dollar idea was born and here to replace our standard Blanket Of the Month is that very product with all the graphics and text executed by Robert Sommers. He apparently has an enormous amount of spare time. 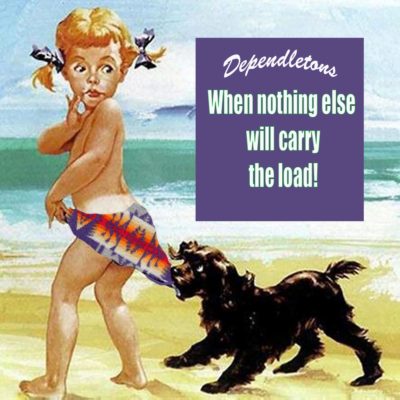