This blog entry is a matter of life and death. We’ll begin with the life segment.

My abode (Fun Fact – rearrange the letters and it it spells adobe!) is in Phoenix, Arizona. Our Tourism Board tempts people to spend their summer vacations here with billboards that say “Phoenix – It’s A Blast Furnace!” You truly can cook eggs on the sidewalks here, but I’ve found the results are far less satisfactory with oatmeal.

To escape this Copper State version of Hell, I spend the first three weeks of August exhibiting in three back to back to back antique shows in New Mexico – the first in Albuquerque followed by a pair in the magical city of Santa Fe. Not only is the weather sublime, but I also oink out on fantastic food – hello Sadie’s in Albuquerque! – AND also reunite with my many dealer friends in the antique Indian and Western art game. Not to mention my loyal customers and this year I am bringing fabulous blankets to sell. Will I be leaving New Mexico with boatloads of money? Let’s just say I have the Midas touch – everything I touch turns to mufflers.

So that’s the life part of my story. Not too shabby, right? In fact, it’s a beautiful story only marred by the following fact…

Perhaps the greatest mystery in life is how much time is allotted to you. You likely don’t know how you’re going to die and you certainly don’t know exactly when. I know how, when and I also know where. This is how it ends…

It is September 9, 2018…early morning on the Rio Colorado River winding its way through the jungle of northeast Costa Rica to meet the Caribbean Sea a scant ten miles away. I’m in a small boat with my son Jared and a Costa Rican native fishing guide. Let’s say his name is Juan, because I think we can safely rule out Nigel.

It will rain later in the day as it always does in the jungle, but for now the sky is blue and clear. Scarlet Macaws streak overhead. Howler Monkeys are…duh…howling. Enormous crocs glide in and out of the water.

We’re here to try our luck with one of the greatest gamefish in the world….tarpon…known to fishermen as the silver kings. It’s not a fish to eat…nobody does. It’s a fish to fight and that fight can last over an hour…sometimes two. When hooked they launch themselves out of the water like a missile and in a long duel can leap a dozen times or more. When they jump the seasoned fisherman knows to bend forward towards the great fish and let his line go slack. This act of supplication is known as “bowing to the king”.

The philosophy of my headquarters for this epic event, the Rio Colorado Lodge, is to never kill a fish…it’s strictly catch and release. The tarpon also fall under the protection of a nearby national park and so they are not only numerous, but grow to enormous proportions. A small one is 120 pounds…the largest well over 200. Imagine clasping a 120 pound human in your arms for an hour or two while it tries to escape with all its power. Then imagine there’s no heaven…it’s easy if you try. Sorry – sometimes I channel John Lennon.

When a tarpon seizes your bait it almost immediately goes furiously airborne. It rips 100 yards of line off your reel in an instant. You start to reel in and then the fish goes deep. Your hands cramp terribly. Your arms and shoulders go numb. Your back is breaking. And then there’s the fishing rod itself…which you bury in your gut or hip to steady while the behemoth tries to escape…and you can immediately feel the butt of the rod boring through your soft tissue like butter.

On that September 9th morning I make a long cast and instantly see a blinding flash of silver as a tarpon rolls to the bait. I tense for the inevitable. SMASH! The tarpon is on, feels the sting of the hook and EXPLODES out of the water. IT’S THE BIGGEST FISH I’VE EVER SEEN! JESUS!

I look at my son – the fish is far larger than him, but to be fair doesn’t have a master’s degree in business as Jared does.

My right knee has been bothering me a lot lately. Two steroid shots haven’t helped. The fish pulls hard. My knee buckles. I’m now on the bottom of the boat shrieking in pain. The tarpon could care less. I grab my knee with my right hand and transfer the rod to my left. Adrenalin has kicked in like a runaway freight train. My brain says YES!

My heart responds with a resounding NO!!! and I have what your cardiologist calls a M.A.C.E. – that’s cardiologist speak for Major Adverse Cardiac Event.

Barry Friedman, dead of a heart attack induced by a Costa Rican tarpon.The bad news is I’m dead. The good news is the whole trip is prepaid for and Jared can continue fishing.

Which breathlessly brings us to our Blanket Of The Month. This very bad boy was made by the Buell Manufacturing Company of St. Joseph, Missouri. It is their Moki pattern and a date of 1909 would not be wrong. Yes, it has swastikas and for the millionth time, was made decades before Hitler forever tainted this ancient symbol of good luck and prosperity.

It is incredibly rare to find a blanket as old as this still residing in the state of its manufacture, but after many years of negotiating it finally left Missouri and now resides here in Arizona. Being wool it’s unbearably hot and is very anxious to go to New Mexico with me. 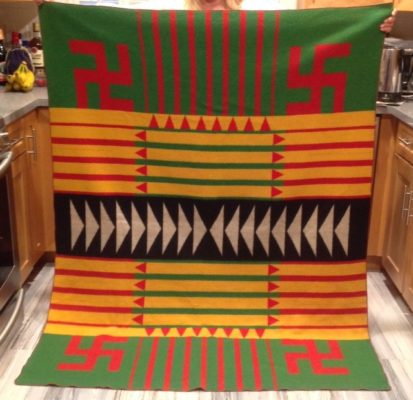 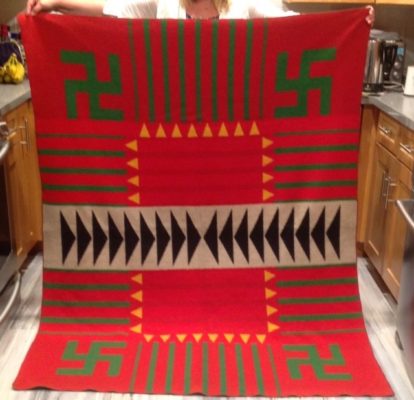