In my July entry I predicted my own death in Costa Rica – my killer a hooked giant tarpon that would trigger a fatal heart attack. I’m usually kidding when I write, but this time I was not. I had an overpowering feeling that I was going to meet my end on this trip and decided death by very large fish would be a relatively pleasant way to go. I’ve led an interesting life…if the final curtain came down fishing in the Caribbean Sea it would be far better than eventually withering away in assisted living…assisted dying, actually.

My instincts were… you’ll excuse the expression… dead-on. There was a death. It just wasn’t mine.

I did due diligence in the choice of a fishing destination. Trip Advisor, Yelp, fishing forums and I just kept coming back to the same place in northeast Costa Rica. Glowing reviews…the fishing was unparalleled…the food delicious…and the owner was “colorful”.

So was Colonel Kurtz in Apocalypse Now. Meet Dan Wise, the onerous owner and emperor of the Rio Colorado  Lodge.The place was established nearly 50 years ago by a gentleman named Archie Fields. Wise, at the time a Mississippi criminal attorney, had gone there to fish and managed to finagle his way into Fields’ good graces. Fields was dying of cancer and Wise eventually acquired the lodge. Rumor has it he swindled the widow Fields out of the place and never paid a dime for it, but let’s say for the sake of avoiding a libel suit that couldn’t possibly be true.Twenty-two years later at his jungle headquarters Dan Wise at age 69 reigns supreme.

This is a picture of a much younger Lawyer Dan holding a snook. If Dr. Seuss was captioning this picture it’d be Good Snook Bad Schnook. 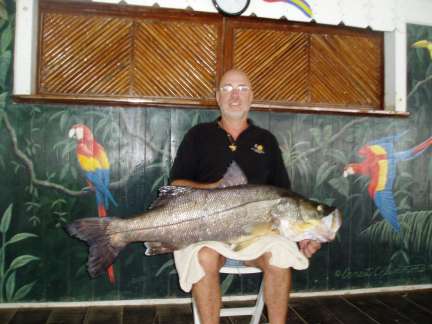 What the Rio Colorado Lodge offers is access to the the greatest tarpon fishery in the world. Schools numbering in the tens of thousands are commonplace – literally acres of fish. It’s an unforgettable sight. And they’re huge – the biggest weighing in at well over 200 pounds.

I enter into evidence this picture of my son Jared battling an enormous tarpon that took an hour and forty minutes to land. The fish launched itself high out of the water like a Tomahawk missile 9 times and towed our boat three miles during the duel. The beast was released to fight again another day and so was the fish. 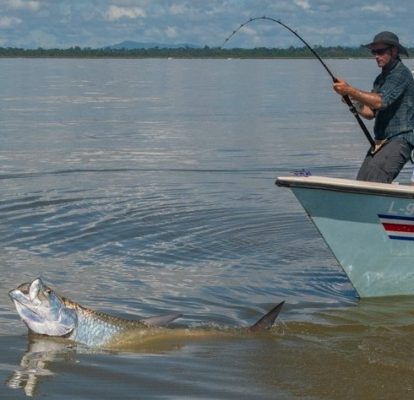 Such fish do not come cheap. It costs roughly $600 a day per fisherman plus cash tips to your guide and the lodge staff.

The lodge is a creaky, deteriorating semi-slum that hasn’t been updated in decades. Your room is a dump. The hardware in the shower is completely corroded…the toilet bowl stained a permanent grotesque shade of yellow. The bedspread can likely be carbon-dated to the Bronze Age, but that would require actually touching it, which is unthinkable.

One tends to forget you wouldn’t let your pet weasel stay in such a wretched room when you are catching monster fish all day. If the fish aren’t biting you wonder why you’re paying the world’s most annoying man a small fortune to sleep in a Motel 666.

No jungle adventure is complete without bugs and the lodge delivers world-class bugginess. Every evening at dusk a blood-crazed army of degenerate mosquitoes defile every square inch of your body just for sport, but when all is sad and dung, it’s your time in the company of Dan Wise that makes the Rio Colorado a destination forgetaway.

It’s impossible to describe Mr. Wise’s voice, but I will try. It is the most grating nasal ear-piercing high-pitched grits-thick Southern-fried accent you’ve ever heard and that intolerable voice never stops. It’s the first thing you hear in the morning and the last thing you hear at night. When you can’t tolerate it any longer and flee to your room he parks himself outside your window and continues to talk. Sinatra had to sing. Astaire had to dance. Dan Wise has to talk.

Question..what would you expect to eat at a fishing lodge? Fish? Sorry. No fish today or for that matter any other day…enjoy the meat loaf!

To be fair, it’s not the worst food in the world. It’s just the worst conversation. The mad king holds court at every meal and hijacks every conversation. What might start out as talk about the day’s fishing or the weather immediately leads to a Dan Wise story and there are three critical elements to every Dan Wise story. First, every story is about an event that happened either in Mississippi or Louisiana. Two, every tale occurred at least 25 years ago and third, every story is a story he’s already told you.

I should also mention that Dan can’t go four words without swearing and his favorite topic is prostitutes. It seems that over the years many of his fisherman customers have just been using the fishing aspect of the trip as a cover story to their wife or girlfriend. Their real interest is female companionship and businessman Dan is apparently not unwilling to put consensual adults together. My son and I opted out on that possibility – I believe I said I was interested in catching a fish, not a disease.

Dan sees enemies everywhere. There’s another lodge close by – the Silver King. Dan on the competition: “We’re partyin’ like rock stars over here and you know who fishes there? CIA. Drug dealers. I’ll tell you this much – they’re all a howling pack of goddamn wackadoodles.”

You might say Dan is not a champion of women’s rights. His girlfriend is a Costa Rican much younger than himself and doesn’t say much. None of the women who work for Dan say much. Because Dan has high standards when it comes to women and when a female doesn’t measure up “she sure as hell would not be on my preferred whore list.”

He’s also not a leader on racial relations. He mentioned at dinner one evening that “evidently it’s just not politically correct to tease Negroes any more. They’ve taken all the fun out of it.”

A typical yarn begins with, “Now that reminds me of a little itty bitty somethin’ that happened in Hattiesburg, Mississippi, in 1962. So I’m on the phone with T.C. Hicks and you know that bubba is slipperier than a frog on ice. Turns out he’s mixed up in some kind of wackadoodle deal with L.C. Paisley and he wants me to be his attorney. Well, I can’t do that because I’m already representing Junior Senior, Jr. in a trumped-up bestiality case. I had to use all my considerable powers to convince the jury that goat had just been leading him on.”

Our fishing guide each day is a local named Wendell, who speaks perfect English and is a very gentle and religious man. His older brother Noel is the leader of the local church and works at the lodge as a mechanic. His specialty is Mercury outboard motors and he’s been keeping them humming for 30 years.

On our fourth and final day fishing our boat engine misfired returning to the lodge. Wendell didn’t want to keep running it so made a call and another boat came out and brought us in.

My son immediately headed for our hideous room – he loathed Dan and couldn’t tolerate another encounter. I, on the other hand, decided to grab the opportunity to hear one final muy loco rant.

Dan’s phone rang. It was Wendell, who had just received the worst possible call moments after we had left him. “What?,” Dan said. “They lopped his head clean off?”

Dan’s girlfriend was so alarmed at this point she became bold enough to speak. “What’s wrong?”

“Now just hush, woman, and don’t start carrying on like you do. It’s Wendell on the phone. Noel’s dead. He was fishing on the beach and somebody crept on up behind him and decapitated him with a machete.”

His voice rose in thunderous fury. “NOW WHERE THE HELL AM I SUPPOSED TO FIND ANOTHER GODDAMN MECHANIC?”

Possibly the look on my face reflected this was not the reaction I was expecting to a man’s horrible death and he said, “And by that I mean this is TERRIBLE news.”

The killer was a 25 year old kid with a history of mental illness and thought he’d slain a guy he’d had an ongoing dispute with. It was a case of mistaken identity… Noel was not that guy. It was the first murder ever in the village’s history.

I thought it was me who would die in Costa Rica, but I picked the wrong guy, too. Two men enter the Rio Colorado Lodge, one man leaves. Dan Wise stays. Right now he’s probably telling a group of fishermen a wonderful story about “some fatass bitches in Biloxi”. Good times.

It’s been a long and dangerous international trip getting here, but let’s meet and greet September’s Blanket of the Month.

Hailing from Provo, Utah, and weighing in at 3 1/2 pounds of virgin wool is this c.1915 Indian blanket from the Knight Woolen Mills. Knight blankets are the rarest of them all and this pattern is not pictured in my book Chasing Rainbows. There is, however, a wonderful chapter on the Knight Woolen Mills and if you buy enough of my books I’ll be able to go tarpon fishing in Costa Rica again. See you at the Silver King Lodge, wackadoodles!. 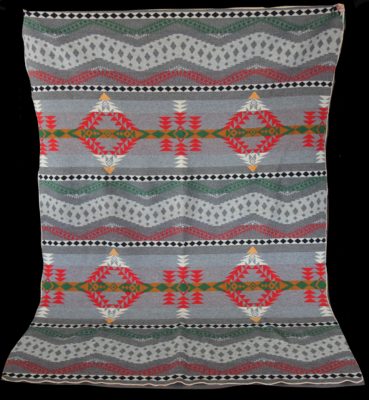