As some of you know I was a professional comedy writer. It happened like this. I read my first real book, The Story Of Roland, when I was 5 and never stopped reading after that. I thought then and I still believe that books are sacred things and being a great writer is the height of human achievement. At least my idea of human achievement.

I became a very fast reader and it was not uncommon for me to read a thousand pages or more in a day. I read everything I could about American history and then world history and continued to read non-fiction for years, but words and the arrangement thereof became such an aphrodisiac to me that I began to seek out the work of novelists with soaring imaginations and singular voices. Dostoevsky destroyed me with his powers – to my mind the greatest novelist of all. Ray Bradbury took me to other worlds. Jack London wrote 56 books before dying at age 40 – I read them all.

One of my idols became a friend – Harlan Ellison. He passed away a few days ago at 84 and I cried when I heard the news. I first read him in my 20s and never stopped reading him, because he never stopped writing. Books, short stories, movies, newspaper columns, television scripts. Words erupted out of him.

Genius. Polarizing. Heroic. Vicious. Visionary. He called his house Ellison Wonderland and it was bursting to the seams with tens of thousands of books. I met him when we were both picketing during a Writer’s Guild union strike rally and he couldn’t have been nicer, which was certainly not his reputation. I’m from Cleveland – he was from very nearby Painesville – and we both reminisced about how much we loathed our childhoods in Ohio. Harlan could be a brutal enemy or your best friend. The latter was much the better deal.

Trust me, I’m no Harlan Ellison when it comes to talent, but I had my first article published when I was 11 and from that moment on I knew I was going to be a writer. I knew I wanted to be a comedy writer after I read Max Shulman. Max wrote, among many other brilliantly hilarious things, the Dobie Gillis stories which eventually became the TV show and I still laugh out loud when I read his work. Here’s a link to his most famous story, Love Is A Fallacy, which was published in 1951 and is still being read/taught in many college creative writing courses.

I did eventually become a Hollywood comedy writer and my first paid professional job was writing jokes for the wonderful Phyllis Diller. Some of my older readers will recall that Phyllis, not Joan Rivers, was the first celebrity to freely admit to having plastic surgery and became its most famous and certainly funniest champion.

When I rang the bell at her house for the first time the door swung open and before me was a face completely swathed in bandages. “You must be Barry,” the thing said. “I’m a friend of Phyllis’. I just had a facelift and all her friends recover at her house. She’s in the garden and will be in very soon. She’d like you to wait in the kitchen.”

Five minutes later in walks Phyllis wearing a huge floppy garden hat and no make-up. She hugged me and said, “Is it really you, Barry? I’m so excited to work with you!”

“My parents are losing it that I’m here and I am, too. I grew up watching you. I can’t believe you’ve hired me to write jokes. What should I call you? Miss Diller?”

“Honey, you call me Phyllis, but after awhile you can call me what everybody else does.”

“Asshole!” was her reply and she unleashed the trademark Phyllis Diller laugh.

I fell instantly in love with her and every year for the rest of her incredible life I got a Valentine’s Day and Christmas card from her. After she died somebody put a list of their top 30 Phyllis Diller jokes of all time on the Internet. A joke I had written came in at #2. The joke was “Burt Reynolds asked me out. I was in his room at the time.”

I am terrible at remembering them, but I am asked about jokes all the time because I have been fortunate to have worked with many of the funniest people of our time. I’m only going to drop a couple names here.

This is a joke I remember because I think it is the most unique joke I’ve ever heard. I have been blessed to have Richard Lewis as my pal since we were teenagers. The highly neurotic Mr. Lewis is unquestionably the most prolific joke writer I’ve ever known and nobody makes me laugh harder in person. I’ve never heard anyone’s joke that I didn’t think eventually somebody somewhere could conceive a nearly identical line….until Richard wrote this one. There is no other mind in the world that could have concocted this. You might not even think it’s funny. I don’t care.

This is the joke: “So for my entire life there’s been Hailey’s comet. And now scientists say that’s wrong…it’s actually Halley’s comet. I’m completely shaken up by this. What else don’t I know? So I walk into this pizza place because I’m freaked out and I need some comfort food. And I say to the guy, “Do you know Hailey’s comet is now Halley’s comet? It’s unbelievable. Give me a slice of pizza with anchovies.” And he says, “You mean a sloose of puzza with ancheevies?”

The biggest laugh any line of mine has ever gotten? No contest. It got a roar from Johnny Carson and an even more coveted Johnny gets up and walks away from the desk – trust me, this is the comedy equivalent of winning the Nobel prize. I worked with Rodney Dangerfield, which sounds like a lot of fun, but wasn’t. He was not a happy man and deadly serious about his one-liners. He obsessed over every syllable. Every joke was timed down to tenths of a second and the entire routine built to fill his allotted Tonight Show slot EXACTLY. The wild card was the length of the audience’s laughter during his stand-up and how much time Carson talked while Rodney was spitting out his jokes from the guest chair.

I remarked during a writing session that it was inevitable Rodney was either not going to finish all his prepared jokes or worse yet tell his last joke before his time was up.  I suggested that if the latter happened he should turn to the guest next to him and say, “What’s new with you?” Rodney thought about it and said, “Yeah, not bad.” In Rodneyspeak that was the highest compliment one could ever hope to receive.

Roughly a year later it happened. After one of his best stand-up performances ever and slaying Carson as they talked in person the ugly head of disaster loomed – Rodney was completely out of prepared material. Sitting next to him was the perfect foil for my line – the deadly serious English actor James Mason. Mayhem ensued.

Check it out! And I apologize for the short ads you may have to sit through, but I promise it’s worth it.

Admittedly it’s been a very circuitous route, but somehow the path led us to our Blanket Of The Month. Very professionally taken in my living room with a cell phone and complete with FedEx box are these pictures of a wonderful J. Capps & Sons blanket  c. 1900. I love it. What’s new with you? 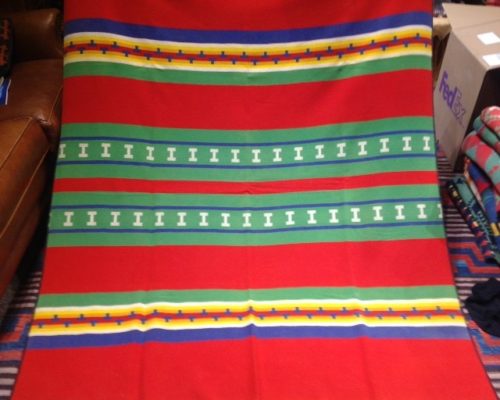