I know you’re thinking what’s Barry got cooking before he serves up November’s Blanket Of The Month? I think you’ll be delighted to know it’s a baked potato.

The Baked Potato Story is unquestionably one of my top five stories and it goes like this:

I smoked unfiltered cigarettes – primarily Lucky Strike’s – starting when I was 15 and at my peak was knocking off two and a half packs a day. I’d smoke two or three cigs before I’d get out of bed in the morning. I’d smoke in the shower. I was a very serious tennis player, but sometimes I’d smoke between points. I’d smoke at cultural events – like the grand opening of another pack of cigarettes.

It used to be cool to smoke and then one day it wasn’t and I tried to quit many times, but it made me very short-tempered. An innocent “Hey Barry, how you doin’?” would result in my snarling, “What do you mean by that?”

After smoking another hundred thousand or so I came up with a plan. Obviously I couldn’t successfully quit around family and friends.Clearly snapping the heads off complete strangers was the way to go.

I left my home in Valencia,California, and started driving…through Nevada and into Idaho.

I had read the psychological desire for cigarettes could linger for days or months or even years, but the physical addiction ended in 72 hours and I became fixated on that number.

Flash forward to the critical third day. It was the longest I had ever gone without smoking and my body was screaming for a nicotine fix. I needed a distraction – anything that would keep me from buying a pack of Lucky’s. I turned to my AAA regional guide to find out what there was to do in my present location…Twin Falls, Idaho.

I proceeded to read the most important sentence ever written: “Twin Falls is the major transshipping point for Idaho potatoes.”

A baked potato! That’s exactly what I needed! One glorious Idaho baked potato and I would never smoke again!

I pulled into a convenience store parking lot and went in. “Hey, is there a steakhouse around here?,” I asked.

“Do they serve baked potatoes?”

“Of course.You’re in Idaho. Everybody has potatoes.I probably have one in my jacket pocket.”

I could have kissed him or, if he was a potato, eaten him.

I strode confidently into the main dining room of the local steakhouse. It was a big, busy room and a hundred people or more were dining. There was at least one gorgeous steaming spud on every table.

A young waitress approached me with a menu. I smiled radiantly and said, “No menu necessary. I only want ice tea and the biggest baked russet potato you can find.”

She returned a few minutes later with my ice tea and then dropped a bombshell.  “I’m very sorry. We’re out of potatoes.”

I could literally feel my neural connections short-circuiting. I somehow stifled an overwhelming urge to shriek. I took a very deep breath.

“Let me explain my situation to you,” I began. “I have been smoking Lucky Strike cigarettes for many years – 50 a day – and I have driven all the way from sunny and family-friendly Valencia, California, to this very spot in an effort to conquer my addiction. Most doctors agree that kicking nicotine is harder than kicking heroin and I am in an almost unbearable phase of withdrawal right now. The physical addiction to cigarettes ends within 72 hours. This is hour 58 for me and I am no longer a man, but rather a giant raw twitching nerve.”

“Bummer,” she said rather anxiously.

“Indeed. But If you bring me a baked potato, I will be able to quit. Conversely, If you don’t bring me a potato something really bad is going to happen. I don’t know exactly what, but it’s going to be awful. So I would strongly suggest you go back to the kitchen and find me a baked potato pronto.”

She fled and soon thereafter a serious-looking young man approached me. “Sir, your waitress won’t be returning… she’s very scared of you. My name is Michael and I’m the manager. Now here’s the deal. We have turned the kitchen upside down. We are completely out of potatoes and  won’t be getting any more until tomorrow. We apologize for that and will gladly comp you anything on our menu. A steak…drinks…whatever you want.”

“That’s really not going to work,” I answered. “I only want one thing in the world right now and that thing is a baked potato. Let me explain my situation…”

“Your deeply traumatized waitress has already explained the situation. You’re quitting smoking and obsessed on eating a baked potato and if you don’t get one you’re threatening to go crazy in our restaurant. That can’t happen. I’ll tell you what I would be willing to do. There’s another steakhouse nearby. I’ll call them and will pay for a baked potato and anything else you might want there.”

“That’s incredibly generous of you,” I replied, “but I have to eat a baked potato right here right now.”

“This is absurd. I’ve offered you every option I can think of and with all due respect, you’re out of your mind. I’d like you to leave.”

“No can do, my friend. I came here for a potato and a potato I shall have.”

“In that case stay right where you are while I go call the police.”

It became crystal-clear at that moment exactly what I should do. Let me preface this by saying I have never done anything publicly that would draw any attention to myself. I’m the invisible man – the completely silent guy sitting in the corner. I’m an observer of life, not an active participant.

Until that moment when I got up from my chair and STOOD on top of my table and loudly addressed my fellow diners. “Ladies and gentlemen, I hate to interrupt your dinner, but as I’m sure most of you know Twin Falls, Idaho, is the major transshipping point for Idaho potatoes. Let me be abundantly clear that I desperately require one of those potatoes and if I don’t receive one I will not be responsible for my actions. I repeat…I want a baked potato and I want it NOW!”

Within a minute a lovely baked potato appeared on my table. Thank you, Jesus, or whatever the name might be of the migrant worker who dug my potato.

The manager dropped by. “Are you happy now? One of my customers gave up their potato because they thought you would slaughter them and their entire family. Eat the damn thing as quickly as possible, get the hell out of here and NEVER come back.”

What a potato! The best ever! I left a hundred dollar tip and have never smoked another cigarette.

Great story, huh? You’re never going to read a better tuber tale. No way this month’s blanket could top it, but have a look anyway. Pendleton blankets of the 1920s were usually pretty tame, but not so with this raucous eyedazzler. Butter and chives are optional. Bacon bits, sour cream and cheddar cheese are available on request. 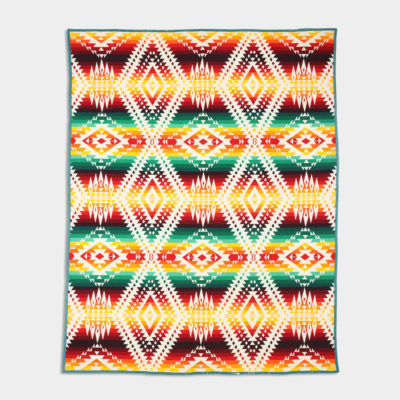 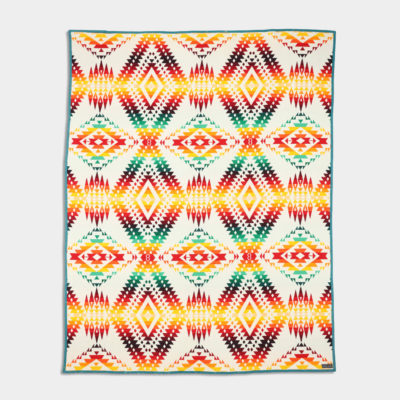