If you’ve ever spent any time around me at all, chances are very good you’re certifiably insane. Apparently people are so instantaneously comfortable in my company that they drop any pretense of being normal. I’m a lightning rod for lunacy.

Case in point my recent kitchen remodel. I strolled into my kitchen one morning and found the floor completely buckled due to a broken water pipe. Even I realized the floor had to be replaced.

I admit I picked out rather large porcelain tiles. Two by three feet and each one weighed 22 pounds. My ace tile man Hector had never seen anything like them. His young son Ramon normally assists him, but these tiles were far too big and heavy and I became Hector’s right hand man.

Hector’s English is not strong and my Spanish even worse and so for three days we toiled together and all Hector said was “Crazy tiles!!!”

I was referred to a local cabinet company and settled on a price with their sales manager, Kevin Quinn. We hit it off immediately and I asked him how he got into the cabinet game . He confessed he’d been a full-time professional poker player for eighteen years. The lifestyle had burned him out and he took the first “normal” job he could find and this was it. He assured me the old cabinet removal and the new cabinet install would go smoother than silk.

Not quite. Two young men showed up to pull my existing cabinets. One had forgotten his tools…an excellent sign. After an hour they had not removed anything, but in the process of trying they had severely damaged my walls in about a dozen places.

I called my new friend Kevin and explained the situation. “That’s completely unacceptable and I apologize, Barry. Which one of our crews is there?”

“I don’t know if I would call them a crew since one of the two guys forgot to bring his tools. That would be Paul. The incompetent who brought stuff is Ray, but in his hands tools are only weapons of mass destruction.”

“Paul and Ray? They never should have been sent out on your job. They’ve never removed cabinets in their lives!,” Kevin declared.

“And they can still make that claim,” I replied. “I want them gone and you have to send me somebody pronto to fix all the damage they did.”

“Absolutely. Little problem though. Our regular repair guy is out sick and I only have one other guy to send and to be honest, he’s kind of different.”

“Well, his name is Lou. We’re pretty sure of that. But we don’t know how old he is, where he’s from or where he lives.”

“Kevin, I don’t want to date him. I just want him to fix the damage. Can he do that?”

“No question he can fix it, but sometimes he’s not feeling it.”

“Yeah and can I ask you a personal question, Barry? You’re not Catholic, are you?”

“That’s great because I sent Lou out on a job the other day and he told a Catholic woman he couldn’t do any work for her because Catholics eat their babies.”

“Another happy customer,” I replied. “Anything else I should know?”

“He may mention Lizard People.”

“Of course he might. By all means send him right over.”

An hour later my doorbell rang and there he was….a scruffy middle-aged man with a bad Beatles haircut.

“Call me Angel, because you’re going to think you’ve gone to Heaven when I’m done.”

“You have an unusual accent. Where are you from?”

“I won’t. Follow me and I’ll show you the damage.”

He surveyed the wreckage of my kitchen and said, “I can fix. No problem.”

“That’s great news. Do you want to go get your tools?”

“Not quite yet. Don’t worry – I don’t charge by the hour. Tell me, what did Kevin say about me?”

“He said you’re a valued employee and a wonderful ambassador for the company.”

“What did he really say?”

“That nobody knows anything about you and you might bring up the subject of Lizard People.”

“I’m sure you know they run the world from their underground bunkers and they come from Planet Y.”

“I don’t believe I’m familiar with Planet Y. Where is that exactly?”

I slapped myself in the forehead. “Hello! I’m such an idiot! Where else would Planet Y be? Look, could you start the work?

“I’m really not in the mood right now.”

“Why would you be? What could I have possibly been thinking? Look, how about you hang out for a few minutes and maybe inspiration will strike you. Meanwhile, I’m going to make a call.”

I rushed into my bedroom and called Kevin.

“You sound upset, Barry. Is it the Catholic baby thing?”

“I’ll tell you everything later, but bottom line he’s not in the mood to do the work.”

“This is insane, Kevin. You took thousands of dollars of mine as a deposit. First I get sent totally inexperienced guys who destroy my walls and now the escaped mental patient you send to fix the damage is not in the mood to do it?”

“Look, I know this is not a situation either of us want, but it can have a happy ending.”

“I told you we don’t know anything about Lou, but that’s not entirely true. There is one thing I do know for sure. He really likes waffles.”

“Waffles!?! Are you kidding me? You want me to make waffles for this madman? I don’t have any waffles and I’m not going to get any waffles. I’ll talk to you later!,” I raged and stormed into the kitchen.

“OK, Lou, here’s the deal. I just talked to Kevin and he said if you don’t do the work you’re fired.”

“Good. I was going to quit anyway. Is there a Denny’s or an IHOP around here? I could really go for some waffles.”

Off he went a-waffling and neither I nor Kevin ever saw him again. Kevin refunded my money and I had the cabinets installed by another company that did a very professional job. Had I hired them to begin with I wouldn’t have been able to delight you with this wondrous story. Hey, life is good except for all the bad parts.

Obviously it’s time to unveil our Blanket of the Month. Racine Woolen Mills of Racine, Wisconsin, produced my favorite Indian blankets and here’s one I’ve never encountered before. A great banded pattern and the trademark dense Racine weave. Perhaps while you’re looking at the blanket you might also notice a couple lower tier kitchen cabinets. Nice, right? 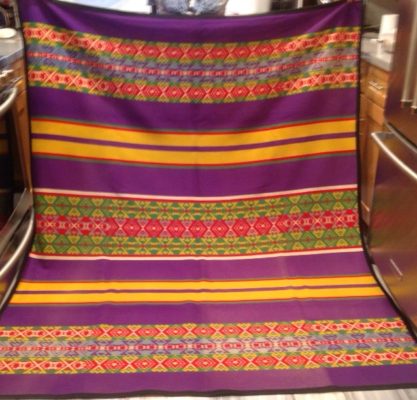 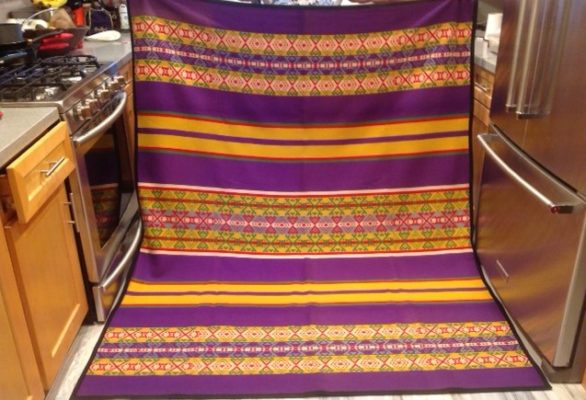